If you’re seeing this error when consuming an AIF service, the reason may be that changes were made to the service object in the AOT, without regenerating the incremental CIL and reactivating the inbound port.

In our case, one of the developers changed the namespace of the service in the AOT from the default ‘http://tempuri.org’ to ‘http://schemas.microsoft.com/dynamics/2011/01/services.’ The service was refreshed in the ‘Services’ form, and the inbound test file was updated with the correct namespace. However, since the Inbound Port wasn’t reactivated, the service endpoint (in our case the client used a File System Adapter), was still deployed with the old namespace, resulting in the error below. Reactivating the port (and Incremental CIL) updates the endpoint with the proper namespace and resolves the issue.

The request failed with the following error: The message with Action ‘http://schemas.microsoft.com/dynamics/2008/01/services/<Service>/<Action> cannot be processed at the receiver, due to a ContractFilter mismatch at the EndpointDispatcher. This may be because of either a contract mismatch (mismatched Actions between sender and receiver) or a binding/security mismatch between the sender and the receiver. Check that sender and receiver have the same contract and the same binding (including security requirements, e.g. Message, Transport, None).
View the exception log for more details. 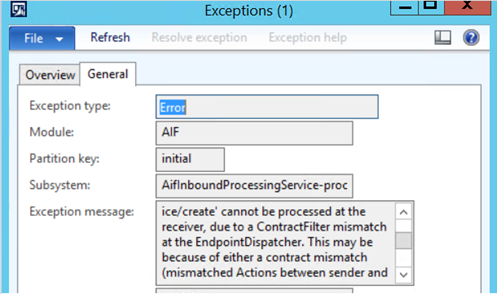 Wanted to mention this briefly, in hope that it may save someone some headaches.

In case you are seeing the following error in the AIF Exception log: “Return type void is not supported,” followed by “Unsupported type,” there may be a compilation issue with one of the axBc classes of the service.

Received the following error when consuming a custom AIF service, over Net.Tcp, from SharePoint 2013 :

The socket connection was aborted. This could be caused by an error processing your message or a receive timeout being exceeded by the remote host, or an underlying network resource issue. Local socket timeout was ’00:59:59.9780837′.

Add some widgets to this area!